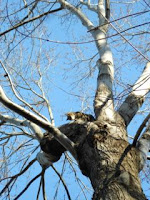 Trucker is a Bengal cat who had been stuck in a tree for 7 days. Apparently, a neighbor’s dog had chased Trucker (he’s named after a country music band, the Drive By Truckers) into the tree. His human tried various things to get Trucker to come down -- extension ladders, the canned tuna trick, and, of course, hours of loving coaching from below, but all was in vain -- Trucker was not coming down on his own.

I went out the morning after I got the call to see if I could help. As I got there Trucker was mewing and whining – the poor thing hadn’t had anything to eat or drink except rain water and bugs (maybe) since 8 days before. Trucker was holed up in a gash in the tree about 35 feet up. 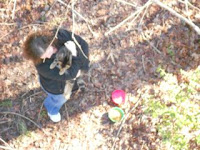 At one point as my rope dangled in front of Trucker he playfully reached out and batted at the line. That made his owner happy since it showed her that he still had a bit of spunk left.  When I got close to Trucker it was obvious that he didn’t understand my intentions and he started to climb higher.  Fortunately he wasn’t feeling too adventurous and the spot he climbed to was actually better for making the grab.

I lowered Trucker to his human who happily opened the bundle and presented a much-relieved Trucker with his first kibble in 8 days. It felt like Christmas morning for both of us.