Allyn's beloved cat, George, went missing on a rainy Sunday evening. Monday morning dawned and there was still no sign of him so Allyn started preparing flyers to pass out in the neighborhood. As she was doing that she heard from her back yard neighbors who said they had found George about 30 feet up a tree in their front yard. Allyn took the day off work to try to coax George down, even using an extension ladder to get to within 10 feet of him. But despite her valiant efforts George wasn't able to bring himself to come down those last few feet.

After two rainy and cold nights in the tree I came out to see if I could help. As I put my line in the tree George became playful, ventured from the stout trunk where he had remained most of the previous day, and tip toed out on a little branch to where my climbing line passed. He stayed there for the rest of the rescue, which made the rescue much easier than I thought it was going to be.

George was a super cute rescue and what made the entire experience all the more enjoyable was seeing Allyn's relief and joy when she had George back in her arms. George could be the twin of our younger cat, Heber (there's a picture of Heber below the video), which also made the rescue a memorable one. Heber and George are even the same age - separated at birth maybe?? 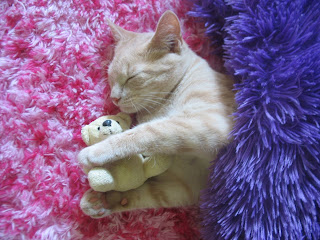