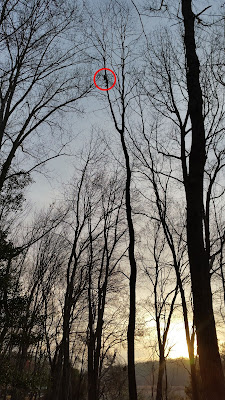 Snuggle Bug belongs to (and was named by) a sweet 6 year old girl.  He is only about 6 months old.  Unfortunately, Bug - as he is usually called by those who love him - ran up a skinny tree in a neighbors back yard.  He spent one night in the tree before his owners called for help.  I wasn't able to come until the evening of Bug's second day in the tree.  All that day families, kids, and couples had seen Bug from a trail in a public park about 20 yards from his tree.  Bug's mom found it necessary to stay posted near the tree to answer all the passerby's question and to ensure everyone that they had a plan for getting Bug down.

The tree Bug decided to climb was too skinny for me to trust all my weight to, but luckily I could climb an adjacent tree and pull myself over to Bug's tree - a feat that would have been much easier if I thought through the whole process before beginning my climb and had the ropes positioned more optimally.

As I climbed to within 20 feet of Bug he started daringly trying to climb down to me. The problem for all of us was that he was being much too daring!  There were a number of times when I really thought he would fall.  Thankfully, he didn't, but the attentive ground crew had placed cushions and an air mattress underneath him just in case.

During the rescue a crowd of park goers/hikers/runners/walkers/etc started assembling nearby.  I think that crowd grew to about 25 people at one point.  With each of Bug's near falls the audience would gasp.  I soon realized that Bug was coming down to me whether I was ready or not so I quickly pulled up the rescue net and placed it around/under him so he would not fall to the ground if helots his grip.  After about 5 minutes of net maneuvering, coaxing, and finally grabbing poor bug by the tail, I was able to get him into the net and bring him down safely to everyone's delight and relief.

Watch the drama unfold on the video below:

My friend, Merle Braley, accompanied me on this rescue and took some great footage from the ground. He has two videos posted here: http://iphoneographygeek.com/snuggle-bug-cat-rescue-rescuemycat-org/

Thank you to Bug's family for the happy reunion picture! 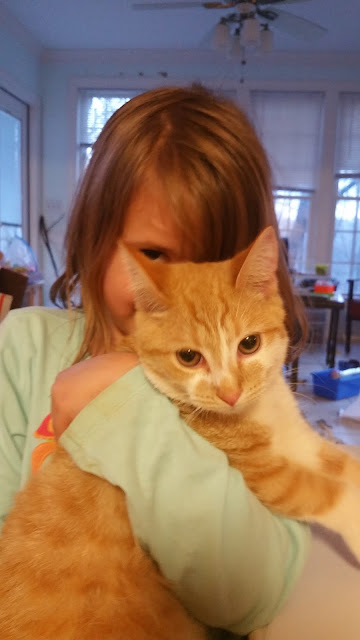